Purple Patches, How Do I Get His Job?, Fire, and The Next Generation

I remember some movement where people wore these purple patches and badges to show they were part of it. The patch was lavender and had a phrase on it in bold, white sans serif font with the first and most prominent word being “No” or “Not.” I told them that it’s bad marketing and if they wanted their movement (which I didn’t agree totally with) to succeed, they would need to choose a symbol and use it instead of a lengthy phrase that people can only read if they know English and are close enough to read it.

How Do I Get His Job?

There was a scene where I was working for some government job with two others. Our manager was in the room just passing the time. He reminded me of a manager from when I worked at the Census, where he was once in our position and mostly became manager because he length of time in the position. He was mostly there to make sure we did our work and helped answer our questions. We were adults with a good work ethic, so his job was easy and he was friendly. I remember wondering if I could ever have a job like his.

Part of the scene incorporated the noisy rooster from waking life crowing its head off outside of the place we were working.

I remember looking out of a front window of a house and seeing Kevin*, Stephen*, and another guy their age (about 5 years younger than me) that I assumed was a friend of Stephen’s from the military. They weren’t wearing uniforms, but their stances looked military and I already knew Stephen recently joined.

They were standing around a pile of large debris from what looked like a construction site for a house. I remember a door without a doorknob lying on the pile. Kevin was sitting in a lawn chair. The other two sat in lawn chairs on either side of him. Kevin lit a match and threw it onto the door. It caught fire quickly, but I felt it was safe because it was away from where I was and the surrounding trees. Stephen and his friend got up when the fire got bigger. Kevin stayed in the seat as if he knew it couldn’t hurt him.

I noticed what looked like gasoline “leaking” in a drip-like pattern, but it was like it was “falling” onto the underside of the awning over the small porch outside of the house. It “rolled” like a drop on a surface – part of it absorbed into the wood – until it hit the siding. Then, it ignited.

I moved away from the fire and was frustrated because I’d have to go outside in night clothes. There was another person in the house, so I thought I’d get them out first. I decided to call 9-1-1 on the way getting the other person, but couldn’t dial the number. After trying so hard, I realized I must be dreaming – dialing numbers into devices are one of the hardest things for me to do in a dream.

All this did was send me into a false awakening loop that played the same scene, but in different ways. I didn’t have any fear, it was more a frustration that they couldn’t burn crap without this gasoline thing happening.

I remember walking along a beach area at a fair or carnival with a friend. He was an older male, but this was the future, so I might have been the same age. We were there with his teenage daughter who wanted to buy material to make clothing. There were vendors and they were selling handmade and recycled items. It seemed to be a trend. The guy said he thought everything looked “ragged” and nothing looked new like it was when we were young. I said it’s a good thing the younger generation was learning how to have recycled things and to scavenge because their generation will have to face wars over resources, devastation from climate change, having too much trash, etc.

* Names have been changed

I don’t remember much more than this:

* Name has been changed

This probably came from looking at spaceship images online when I tried finding out where I saw last night’s dream’s ship before.

In this dream, I remember playing some game where you can not only design a space ship, but you can design your federation/group. There was an old one based on something from Stargate SG-1 and I really wanted to do something different.

I ended up making the “Eris,” named after the Goddess of Discord. It was black to blend in with space and the federation’s mission was just to do whatever they want – good or “bad.” “Bad” would reflect more of a trickster action that wasn’t super “evil” or anything, just something to break norms and “ruffle feathers.” We were out to cause discord.

I remember being sick or something, but walking down a street near sunset. I entered a fancy restaurant where some high school friends were eating. I wasn’t really dressed for the place, so I left.

However, a guy from high school was also on the street. I tried to go faster than him back to my apartment in the dream to avoid talking. He seemed to have the same idea and we matched pace.

I eventually broke off from the path and ended up walking back another way. A cute guy came up to me and started talking to me. He was cool and good looking and I really wanted to keep talking to him when I got back to my apartment.

I knew I knew him from somewhere and spoke small talk, which he seemed to be confused about. I realized why later: before I got to my apartment door, he went to the apartment next door and started to unlock it – he was a neighbor!

I apologized and told him I had bad facial recognition and forgot he was my neighbor. He laughed and seemed OK with that.

Randomly, a group of people – some in weird costumes – appeared to my left. I discovered that Kevin* lived in the apartment on the other side of mine and someone broke into his apartment.

Later, there was a scene with my apartment also getting broken into and a temporary lock was put on the door. It was weird and had to be held a certain way to work and it was obviously not a good lock. I was angry about the situation – not with the guy who broke in, but the others who took advantage of the broken locks. At least, the guy who beat the lock had to work and use a skill.

Later, I was carrying large things to a meeting at work. It was dark and gloomy and some of the rolled poster board I had was getting damaged, but when I got to Court and Union, I couldn’t remember if I locked my door correctly and started walking back toward my office. I texted everyone I was going to be late.

I remember sitting in a classroom with Kevin* and other people about my age. Our desks were designed into a large rectangle where I was nearly facing Kevin.

There was an open CD or DVD player on my left laying lopsided against a stack of books. The teacher was able to spin it with his hand and later, he put a CD or DVD on the area that it should go and spun it again. I later fixed it to have the title of the CD/DVD to be straight. I don’t remember the words, except that it was all in caps and two words.

The teacher seemed similar to the teacher in a previous dream. I think my subconscious is making archetypes and this was “The Teacher.”

I remember he asked the girl next to Kevin how she and Kevin’s birthdays went. Their birthdays were in mid-April, so I thought it was around May.

Later, I had switched to a seat closer to the front and started taking notes. I remember the compass symbols and, although the teacher said we didn’t have to write them down because they were too detailed, I did anyway because I liked the symbols. I remember writing words as well, but I only remember the word, “Russia.” 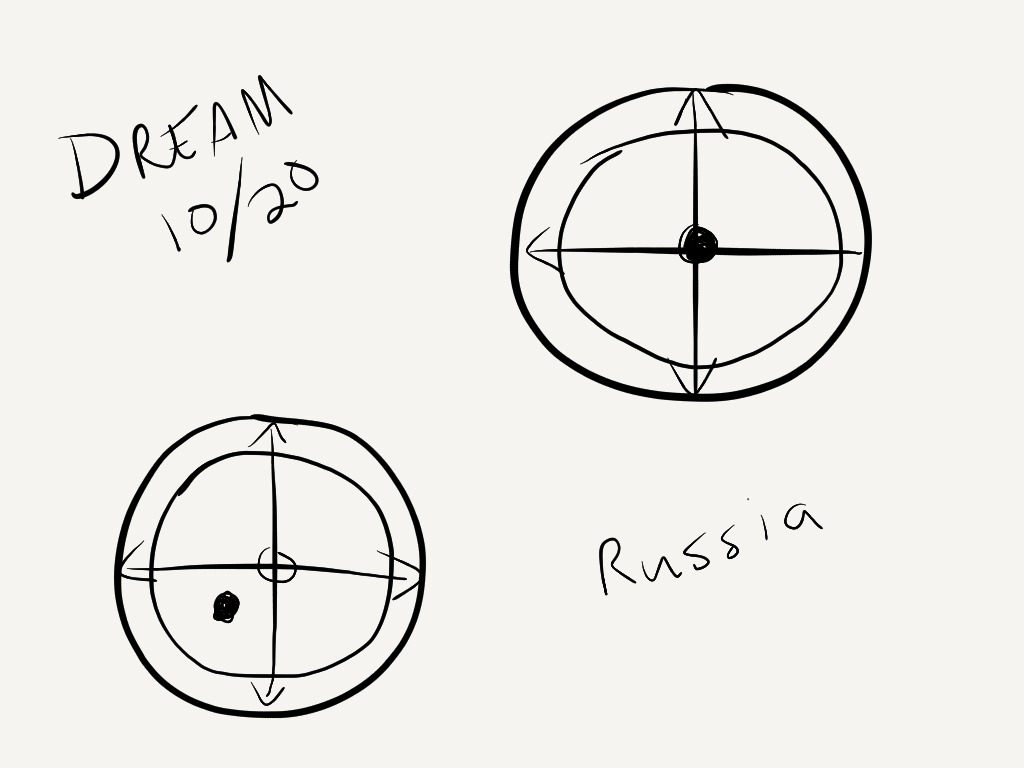 Notes I wrote down in the dream. The teacher said the compasses were too detailed to try to draw in the dream, but I drew them anyway. There were notes about something else, but all I remember is Russia.

There was a small scene where I discovered I was in my parent’s house (pre-2004 renovation) this whole time and the classroom was my old bedroom. I saw Charlie* laying on the couch in the living room and I almost approached him, but I ended up backing up and hitting a desk.

* Names have been changed.

I guess I’ll put down a little bit of multiple random dreams I remember.

In no particular order:

I remember hanging out with a friend’s family and sitting in the back seat of their small car. Out of nowhere, David* (a new character that looks like a friend from high school that I was wondering a few days ago whatever happened to that guy?) walks up and asks me if I still remember his social security number. I didn’t know why I’d even know that and said no (although I do remember his Ashville telephone number). He said it was ADD-D [letters ] LM-NO. I didn’t understand why his SSN would be letters. He was almost like an observer-character. So if converted to numbers – 144-4 [?]-3456?

Also, sometime in the dream, some guys with assault rifles were shooting at cops from the edge of a forest as the cops tried to talk them down. Behind them, there was some sniper guy that was covered in branches hiding on the ground.

I remember thinking about going to El Vaquero, but decided against it. Instead, I remember getting food from a buffet, but the plates were already made. For some reason, I took broccoli from one plate and noodles from another.

Outside, the “pavement” was made of primary colored weird shaped bricks. They weren’t held into the ground in any way so I fell three times because I had clunky high-heeled shoes on. Had to use a stranger’s car mirror to get up.

I remember being in my apartment and David came to my door and rang the doorbell. I told him I wasn’t dressed for company, but I was really just cleaning up to take the trash out. I felt bed, thinking that this is why my life sucks – I don’t take chances and make the safe decisions. I wondered how my life would have changed had I opened that door.

I remember there was some kind of message or email from Kevin* on the window made with a red window crayon. Somehow the room became a workplace and a co-worker erased the message despite me yelling at her not to erase it.

In another dream, I lived in a dorm room in the same building I worked and a co-worker that didn’t like me trashed my dorm room and put in alcohol (which was forbidden) in there. I remember having to go to some building with blue doors to explain that the things weren’t mine.

*Names have been changed.